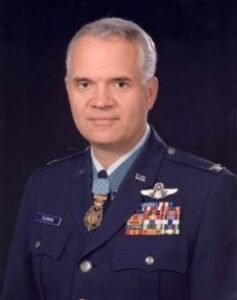 For conspicuous gallantry and intrepidity in action at the risk of his life above and beyond the call of duty. Capt. Fleming (then 1st Lt.) distinguished himself as the Aircraft Commander of a UH-1F transport Helicopter. Capt. Fleming went to the aid of a 6-man special forces long range reconnaissance patrol that was in danger of being overrun by a large, heavily armed hostile force. Despite the knowledge that 1 helicopter had been downed by intense hostile fire, Capt. Fleming descended, and balanced his helicopter on a river bank with the tail boom hanging over open water. The patrol could not penetrate to the landing site and he was forced to withdraw. Dangerously low on fuel, Capt. Fleming repeated his original landing maneuver. Disregarding his own safety, he remained in this exposed position. Hostile fire crashed through his windscreen as the patrol boarded his helicopter. Capt. Fleming made a successful takeoff through a barrage of hostile fire and recovered safely at a forward base. Capt. Fleming's profound concern for his fellowmen, and at the risk of his life above and beyond the call of duty are in keeping with the highest traditions of the U.S. Air Force and reflect great credit upon himself and the Armed Forces of his country. 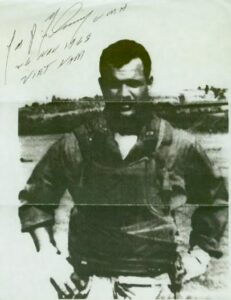 Description:
1LT James P. Fleming was flying his second day as a UH-1F slick AC for the 20th Special Operations Squadron. The rest of his crew were: MAJ Paul McClellan, pilot, SSG Fred Cook, gunner, and J.J. Johnson, gunner. That morning as part of a flight of five (two gunships and three slicks) GREEN HORNETs he had departed Duc Co and inserted RT Chisel for SOG CCS in Cambodian target Tango-51 as part of Operation DANIEL BOONE. The team leader of Chisel was SSG Ancil "Sonny" Franks. The one-one (assistant team leader) was SGT Charles Hughes. CPT Randolf Harrison, the new CO of the CCS Recon Company, was a team member who came along to learn how his men worked. Three Montagnards made up the rest of the recon team. The GREEN HORNETs returned to Duc Co for lunch and fuel. Midafternoon the flight inserted another team further south in Cambodia. In the mean time, Chisel had moved quickly toward a wide river where they were to surveil enemy boat traffic. The NVA hit the team as they were setting up their site and trapped them in a small depression near the river. Hughes’ initial radio calls were not answered. As the NVA threw more troops into the battle, Chisel was surrounded on three sides and pinned against the river. Their next set of radio calls were picked up by their COVEY FAC, USAF MAJ Charles E. Anonsen, flying in a Cessna O2 Skymaster. He alerted the GREEN HORNETs, now returning the Duc Co, and they diverted toward Chisel but were low on fuel.

The two gunships attacked the NVA and knocked out two 12.7mm heavy machine guns only 200 yards from Chisel. CPT Dave W. Miller’s gunship was shot down. They managed to land in a clearing and were immediately rescued by MAJ Dale L. Eppinger, SLICK LEAD, who then departed for Duc Co for fuel. Another slick had to depart for fuel, leaving only Fleming’s slick and MAJ Leonard Gonzales’s gunship on station with the FAC. The gunship continued to engage the NVA but took hits. When Fleming told the FAC he had to get the RT out now or depart for fuel, the FAC directed the Huey around a low hill to mask the approach from enemy fire. At high speed, they came in over the river and nosed the Huey into the bank where Chisel should have been. The NVA, however, had launched another attack and the six member team was too busy shooting for their lives to make it to the Huey. Chisel radioed, "They’ve got us! They’ve got us! Get out, get out!" to the Huey. As Fleming backed the Huey into the river, Chisel blew their last claymores and the Huey crew saw an NVA’s body thrown in the air. Gonzales later recalled, "It was a sheer miracle that he wasn’t shot down on take-off." Fleming asked, "What’s going on down there?" as he reached altitude and surveyed the situation. "We blew them back," Hughes explained, "but we’re out of claymores and can’t hold out much longer."

Fleming knew it would be over an hour before the refueled GREEN HORNETs returned, figured there was only about an hour of daylight left, and determined that the river was too wide to swim and too open to rush across. He told the other aircraft, "We’ll give it one more try." Gonzales said, "I’ll make one more pass over ‘em, give ‘em everything we have, but then I’ve got to get out of here." Fleming fell in behind the gunship. At first he couldn’t find the team, yet he knew he was getting close by the volume of enemy ricochets coming off the river. Then a door gunner saw one Montagnard leap in the river and move toward the Huey with four men close behind. Even Franks couldn’t believe the Huey hadn’t been shot down or driven off by all the enemy fire. Despite AK fire and exploding rockets, Fleming held the bird rock-steady in what the Air Force citation later called "a feat of unbelievable flying skill."

The crew could see NVA trotting and crouching along the riverbank as the gunners alternated between firing their machine guns and pulling men aboard. At last five recon men were aboard but Harrison was not there. Even though Fleming knew Randy best of all these men, he knew he had to leave or be shot down right there. As he began pulling back from the bank, Harrison suddenly appeared in the bushes as he sprayed fire at the unseen enemy. The lanky captain ran four strides, jumped into the water, stroked twice and snared a rope ladder Cook managed to throw out to him. Dragging the man through the water, Fleming catapulted them above the trees as several hands heaved Harrison aboard.

Fleming and McClellan were so focused on what they were doing that it was several seconds before they noticed the shattered windshield. The fuel gauge read EMPTY as they landed at Duc Co. Randy Harrison grabbed Jim Fleming by the head and shouted, "You sweet motherfucker!" - the highest form of heart-felt compliment SOG soldiers paid those who supported them. Franks said, "They were great people. Every one of ‘em there, there wasn’t none of ‘em flinching." In all two Air Medals, eleven Distinguished Flying Crosses, one Silver Star were awarded with Gonzales receiving the Air Force Cross and Fleming the Medal of Honor.

The source for this information was The Helicopter War P:123; SOG P:111+