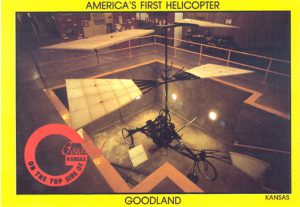 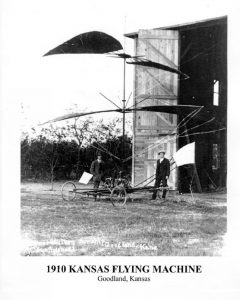 In 1909 a couple of Rock Island railroad machinists in Goodland quit their jobs to build a primitive helicopter. Charles A. Wilson and William J. Purvis built the machine, which had twin sets of blades that spun in opposite directions, and gave a demonstration flight on Thanksgiving Day 1909.

"It didn't fly," said William Daise, curator of the High Plains Museum in Goodland, which displays a 1976 replica of the helicopter. "As I understand, it was hooked to a steam engine that got it a few feet off the ground."

But that was enough to convince residents to buy stock in the venture, the Goodland Aviation Co. Daise said a second machine took to the air in June 1910, "but it was torn up in the air and never rebuilt." The company folded, and its equipment was sold a few months later to one of the original investors.

Other helicopters had been built and flown, but in 1910 the government granted the Goodland machine the first patent for any rotary-winged aircraft in the country. Harold Norton of Brewster, a pilot who built the replica, said the Purvis-Wilson helicopter may have been capable of hovering a few feet but that it was incapable of horizontal flight.

"The sorry part of it is that if there hadn't been so much fun made of it, if there had been a little more money put into it and interest shown in it, they might have worked the bugs out of it," he said.

Helicopter 1910 = 1pOH; two 7hp motors. Three-bicycle-wheeled cart with a 24' vertical shaft for two rotors was too underpowered, but the theory was in the right direction, enough so to earn a US patent. However, funds ran out before their creation flew outside of a brief, tethered test-hop in its barnlike workshop. Unsubstantiated, possibly folkloric, reports claimed it later flew, untethered and piloted by Purvis, momentarily in a show for investors, then crashed and flailed itself to pieces as Purvis ran from it. (A more fanciful version had it running into and destroying the town's water tower, engulfing spectators in a downpour of water and helicopter parts.) Although the venture failed, their design is believed to be the first rotary-winged aircraft ever patented (US patent #1,028,781) and a predecessor to the helicopter.