Throughout the years, the U.S. Air Force (and the military in general) has conducted testing with its aircraft, equipment, and even people to add or improve capabilities towards increased mission success. The following are some examples of that testing. If you have any new or updated information to add, please click here to let us know. 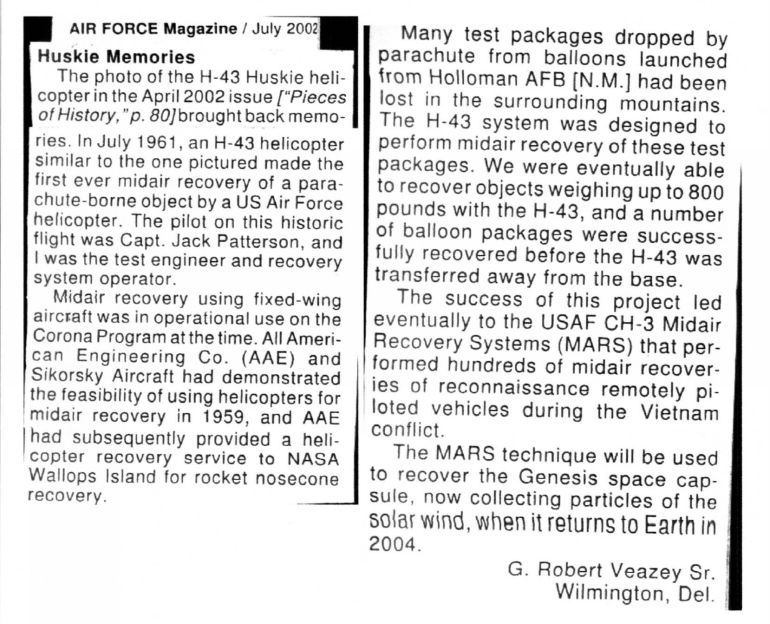 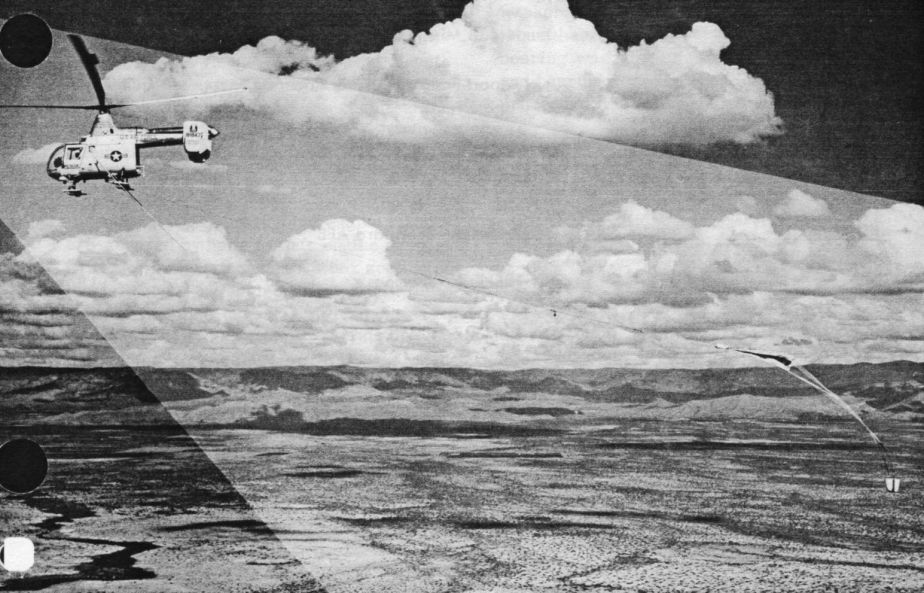 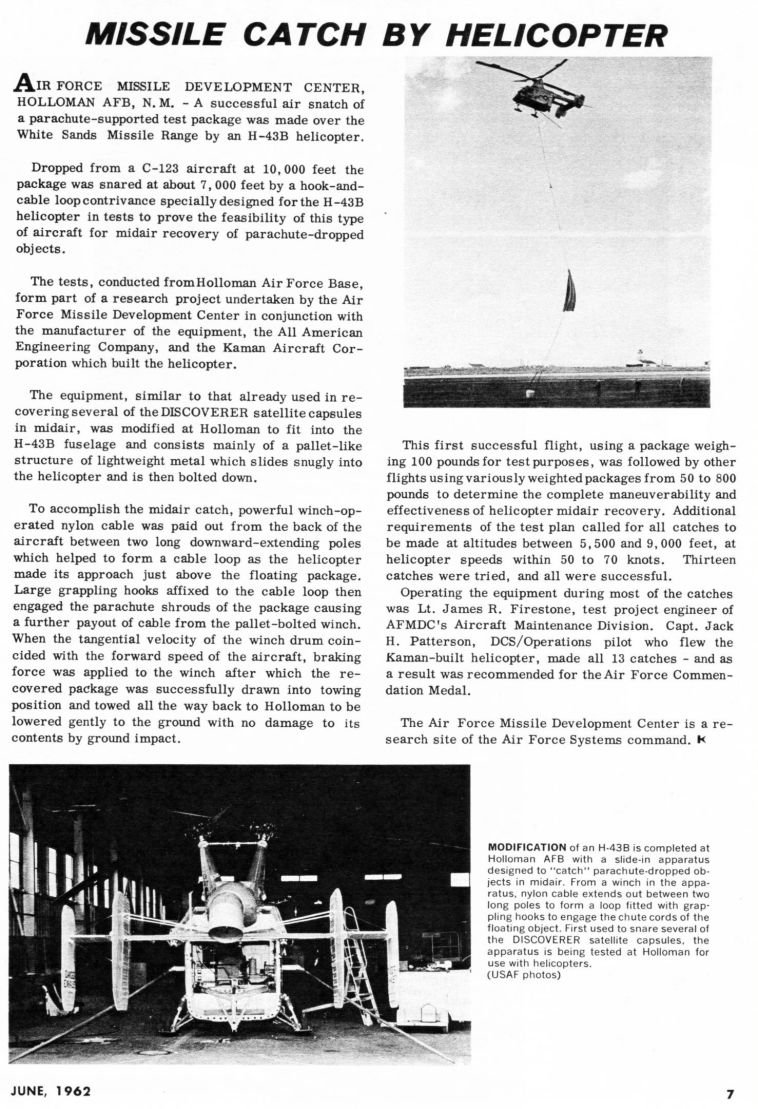 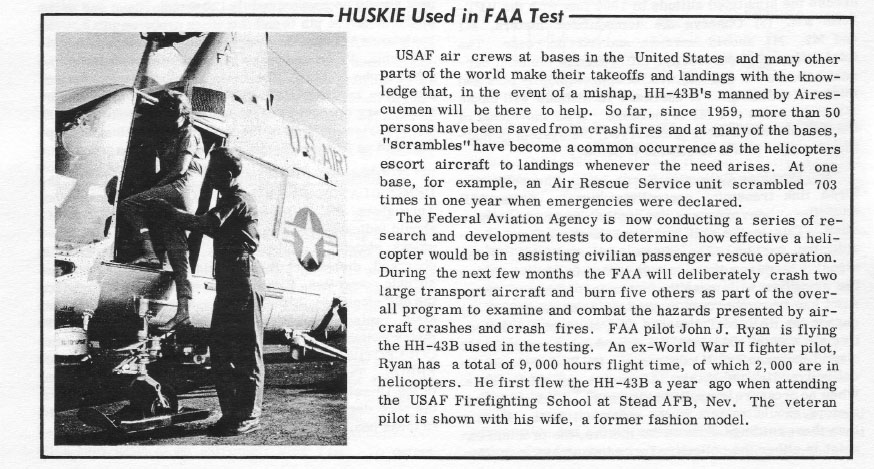 USAF air crews at bases in the United States and many other parts of the world make their takeoffs and landings with the know­ledge that, in the event of a mishap, HH-43B's manned by Air rescue men will be there to help. So far, since 1959, more than 50 persons have been saved from crash fires and at many of the bases, "scrambles" have become a common occurrence as the helicopters escort aircraft to landings whenever the need arises. At one base, for example, an Air Rescue Service unit scrambled 703 times in one year when emergencies were declared.

The Federal Aviation Agency is now conducting a series of re­search and development tests to determine how effective a heli­copter would be in assisting civilian passenger rescue operation. During the next few months the FAA will deliberately crash two large transport aircraft and burn five others as part of the over­all program to examine and combat the hazards presented by air­craft crashes and crash fires. FAA pilot John J. Ryan is flying the HH-43B used in the testing. An ex-World War II fighter pilot, Ryan has a total of 9,000 hours flight time, of which 2,000 are in helicopters. He first flew the HH-43B a year ago when attending the USAF Firefighting School at Stead AFB, Nev. The veteran pilot is shown with his wife, a former fashion model.

(Searching the Internet I found that a DC-7 with FAA registration N68N crashed deliberately at Phoenix-Deer Valley AP, AZ on 24 April 1964). This maybe one of the aircraft involved.

I would be very interested to know more about the testing, including which Huskie (serial number) was used from which unit. (JOHAN RAGAY) 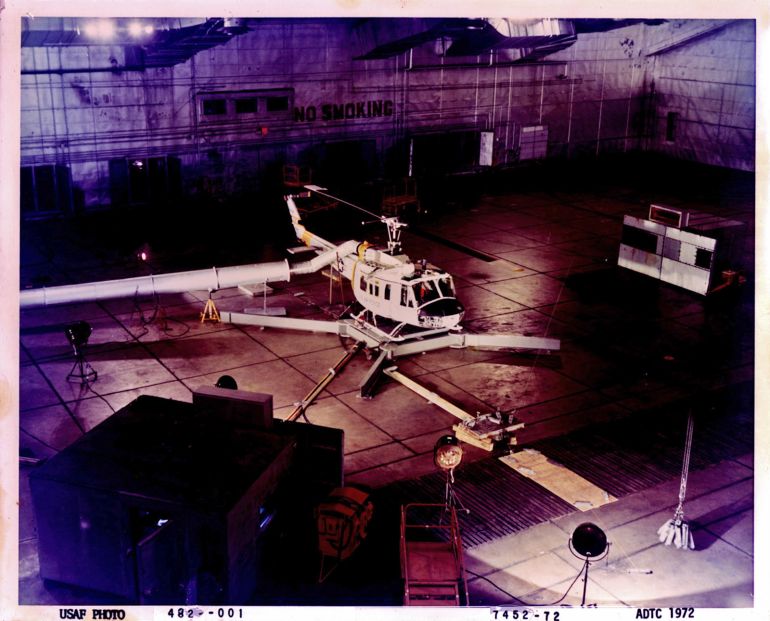 We did extensive testing of the hoist in extreme cold conditions. See the lead weights lower right. We uncovered some wire insulation that crumbled in the 58 below zero temperature. We ran the helicopter many hours in this hangar. I was not absolutely sure I should trust this setup, and I was apprehensive about this tie down technique during the first few runs. It worked flawlessly, and they were some very seasoned professionals at the Climatic Lab Hangar. They reminded me of the people that work at the Jack Daniels Distillery. Very nice and thoughtfully deliberate about all the work they did.

It was quite a project. The cable ran under the wood housing, and back up at the end of the boards housing the cable. There was a limit switch there to prevent the lead weights from hitting the pulley at the roof. I drew up the wiring diagram for this circuit, I remember.

The hoist was tested using Mobile ATF 220 oil, and thus, the only approved oil for the HH-1H hoist. This is one of the better hoists that I have operated. It worked flawlessly, and lifted the lead weights many times for this testing.

Major Gregory Etzel was the pilot, and I was MSgt at this time. Major Etzel and I were the only ones out while operating the helicopter in the hangar most of the time. The others were in the metal building in the foreground, with substantial protection. 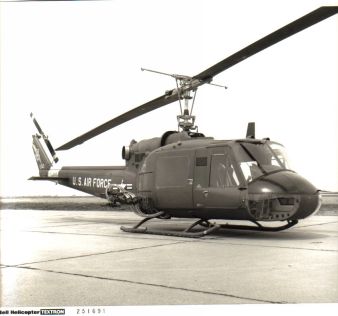 This is the M-6 quad M60C machine gun system tested
on a TAC UH-1F in the 1960s. Tests were also conducted
with psywar BS speaker systems. 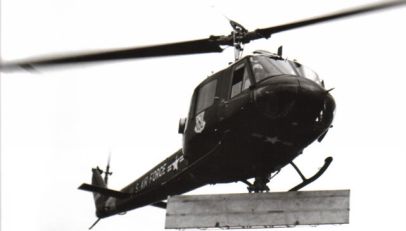 UH-1F with an antenna suspended 45 inches below for detecting low-flying aircraft.  The antenna was tried at Wright-Pat, and that the device was retracted on the left side hard point, there appears to be a test unit emblem on the cargo door. 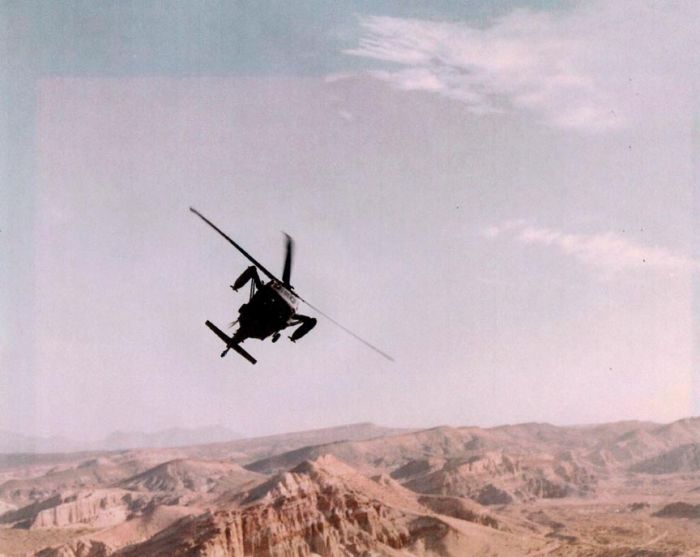 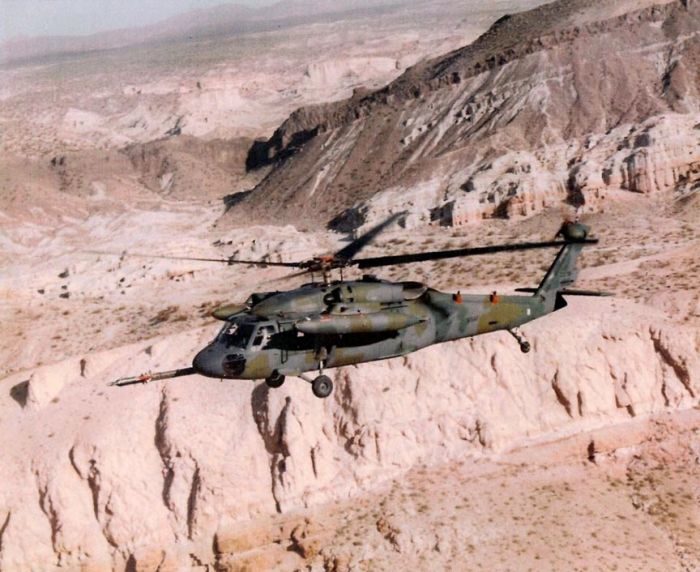 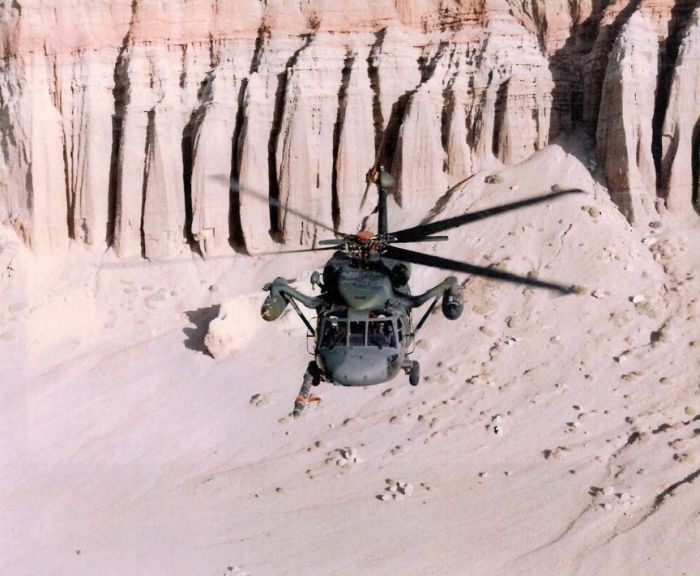 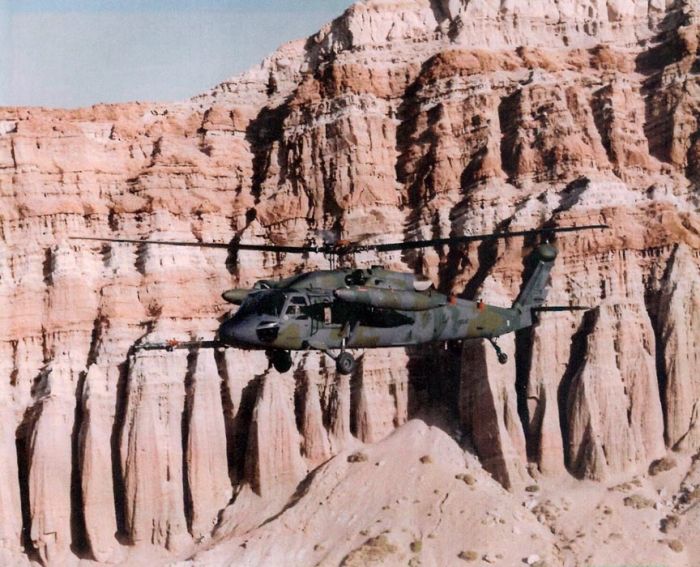 This aircraft (82-23718) was the first USAF HH-60A aircraft designated T-1 (test article one).  I was an original operational test team member assigned to Edwards AFB for the HH-60A Night Hawk program in 1984.  These publicity photos were taken during the first phase of the developmental test program at Red Rock Canyon just north of the base.  The first phase was to document the flying performance and handling characteristics of the basic airframe.  At this time the aircraft was closer to the UH-60A with the exception of the refuel probe and internal and external aux fuel tanks (mounted to the ESSS wings).  The orange equipment on the fuel probe, main and tail rotor heads and tail boom are test equipment to measure the torque, speed, telemetry factors, yaw, true airspeed and other engineering data.  Once we established the performance baseline, the aircraft was flown to Owego, NY for the avionics modification by IBM Federal Systems Division.  The "glass cockpit", FLIR and associated rescue modifications were installed and the aircraft was returned to Edwards AFB for further developmental and operational testing.  Once it was upgraded with the "glass cockpit", the designation was changed to HH-60D.  We were programmed to receive a second test aircraft, T-2.  But congress pulled our funding and cancelled the program in 1985.  We boxed up all our equipment and sent the aircraft to Robins AFB for storage and disposition.  The test documents were stored at HQ AFOTEC archives at Kirtland AFB.  Later, the aircraft was de-modified from the "glass cockpit" configuration and returned to the feet and it is currently assigned to Kirtland AFB, NM. 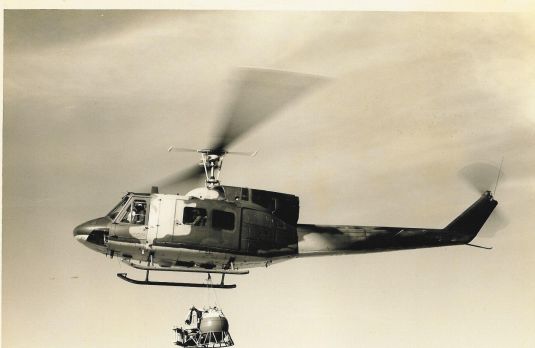 As I recall I think it was on a Myrtle Beach N model when we were still fighting fires with the H-43.

I was in ARS standardization at the time and the powers that be wanted to see if the H-1 could possibly fight a fire in the LBR role.

Because of the unique rotor wash from the H-43 it was much better suited for the fire fighting role and the H-1 with the FSK mission never got off the ground.

The rotor wash from the H-1 really stirred up the fire compared to the H-43 which cut a path into it.

That was probably a one shot test with the H-1 and FSK. (John Flournoy)