We're in the process of creating the content for this page....we'll post an announcement when it's complete. 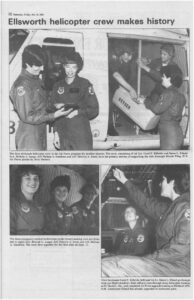 Thanks to USAF RotorHead PAUL NOTTINGHAM for this information and story 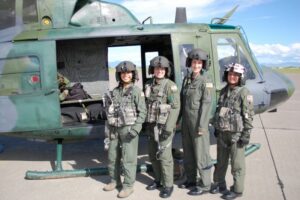 Pictured from left to right are;

In 2001 the crew of a 20th Special Operations Squadron Pave Low, KNIFE 04 received the Mackay trophy for rescuing the crew of a sister ship under extremely hazardous weather conditions behind enemy lines in Afghanistan.

In 1996, another MH-53J crew earned the award for helping to recover former Department of Commerce Secretary Ron Brown's CT-43 that crashed in Croatia, and for helping to evacuate some 2,100 people from a civil war in Liberia. The Liberia mission earned a third MH-53 crew the Lt. Gen. William H. Tunner Award for the most outstanding strategic airlift mission of 1996.

In 1995, a MH-53J crew attempted to rescue two French pilots shot down by a Serbian missile in Yugoslavia, earning the Cheney Award.

In 1993, a Pave Low III crew earned the Cheney Award for evacuating a French soldier from a U.N. compound in Iraq to a medical facility in Turkey. The Cheney Award recognizes an act of valor, extreme fortitude or self-sacrifice in a humanitarian interest during aerial flight.

The crew of MH-53J Pave Low Crew received the Mackay Trophy for extraordinary heroism and self-sacrifice of the crew during the rescue of a downed Navy F-14 pilot in Iraq on 21 January 1991.

An Iraqi missile had shot down a Navy F-14, 60 miles northwest of Baghdad, and the pilot had evaded capture.

At 0730, an MH-53J Pave Low helicopter launched from Ar Ar in a fog so thick that even when flying at 100 feet, the crew could not see the ground. They flew 130 miles into Iraq but could not contact pilot-their coordinates for his location were nearly 50 miles off. The helicopter returned to Ar Ar to refuel and launched again at 1200.

With better coordinates, the crew arrived at the pilot’s location just as an Iraqi truck was descending upon him. The helicopter copilot directed the two A-10 fighter planes flying overhead to “smoke the truck.” The A-10's destroyed the truck with cannon fire, and the helicopter picked up the pilot.

The photo below was taken during the actual rescue of Navy Lt. Devon Jones after his F-14 Tomcat was downed behind enemy lines.