Three CH-21B helicopters were assigned and supported the school by making both land and water helicopter hoist pickups of every student in each class.

Currently USAF ROTORHEADS has has four members that were assigned at Homestead. They are as follows: Art Brand, Les Bunting, Hank Fannin and Jim Moore. 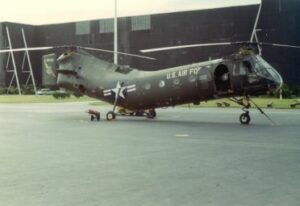 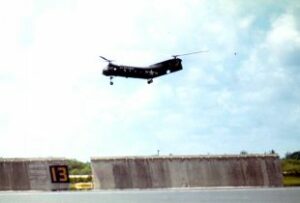 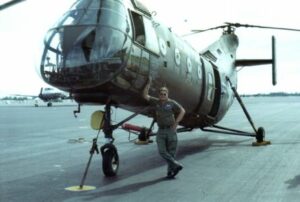 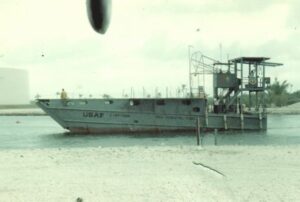 The Survival School was run by the Air Force and the instructors wore Navy uniforms with Air Force rank insignia.

A modified LST was utilized to parasail students from the LST. Upon reaching a pre-determined altitude the student was released to parasail into Biscayne Bay. They would then put to use their training for landing in the water and get into their one-man raft. 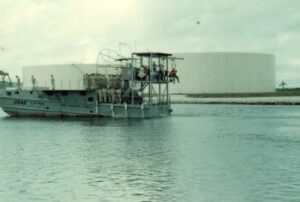 After several students were in the water the H-21 would approach each student. If the student didn’t follow proper procedures and get out of the raft, the helicopter would pass by him and go to the next student. If the student didn’t follow proper procedure getting on the penetrator, the hoist operator would advise the pilot to move forward. Doing this resulted in dragging the student through the water face down. Lesson Learned? Maybe.

The tower in the below picture was also used for water training. 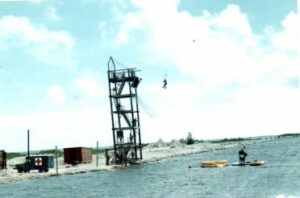 The land pickups were performed with the student standing on a small wood platform, which was in several inches of water.  They all had on a clean, dry flight suit.  If they didn’t follow proper procedures getting on the penetrator hoist operator would move them to the edge of the platform and lower them so they got wet.  The hoist operators always enjoyed this part of the job. 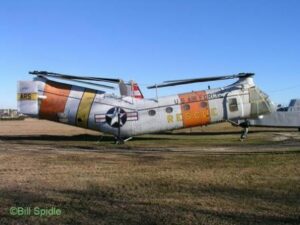 The one I crewed was 4391 but I can't remember the other aircraft numbers. Capt. Skinner and I flew 4391 to a facility near Elizabeth City North Carolina when we were phasing out the H-21s. We were told that the aircraft was going to be used as a practice target and destroyed. Still remember being very upset about that decision. One of the other  H-21s was flown to Mobile Alabama where it was on display with the battleship that was positioned for public display. I believe another went to a trade school or college in North Carolina.  I recall that one of our aircraft made an emergency landing in shallow water in the bay and we lost one in the Everglades when a  main gear wheel hung up in the coral during an attempt to lift off and went on its side.  (LES BUNTING)

THIS A PICTURE OF THE AIRCRAFT AT THE MOBILE, AL. MUSEUM. THE TAIL NUMBER SUPOSEDLY IS 51-5859.
IF IT IS THE HOMESTEAD AIRCRAFT IT HAS BEEN REPAINTED AS A RESCUE AIRCRAFT. (PICTURE FROM MUSEUM WEBSITE)

More photos in our gallery