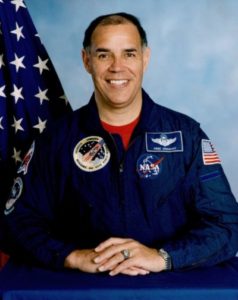 PERSONAL DATA: Born January 7, 1941, in Washington, D.C. His wife, the former Barbara Archer of Washington, D.C., is deceased. They have two grown children. Frederick, D., Jr., is a Captain in the Air Force, and a graduate of Stanford University. Heather Lynn is a social worker and graduate of Sweet Briar College. Recreational interests include water skiing, fishing, hunting, specialty cars, and stereo equipment.

EDUCATION: Graduated from Anacostia High School, Washington, D.C., in 1958; received a bachelor of science degree from the United States Air Force Academy in 1964, and a master’s degree in information systems from George Washington University in 1977.

ORGANIZATIONS: Member, Society of Experimental Test Pilots, Order of Daedalians, American Helicopter Society, Air Force Academy Association of Graduates, the Air Force Association, Sigma Pi Phi Fraternity, the National Technical Association, and the Tuskegee Airmen. He is also on the Board of Directors for the Young Astronaut Council, the Challenger Center for Space Science Education, and the Virginia Air and Space Center-Hampton Roads History Center.

EXPERIENCE: After graduating from the United States Air Force Academy in 1964, Gregory entered pilot training and attended undergraduate helicopter training at Stead Air Force Base, Nevada. He received his wings in 1965 and was assigned as an H-43 helicopter rescue pilot at Vance AFB, Oklahoma, from October 1965 until May 1966. In June 1966, he was assigned as an H-43 combat rescue pilot at Danang AB, Vietnam. When he returned to the United States in July 1967, he was assigned as a missile support helicopter pilot flying the UH-1F at Whiteman AFB, Missouri. In January 1968, Gregory was retrained as a fixed wing pilot flying the T-38 at Randolph AFB, Texas. He was then assigned to the F-4 Phantom Combat Crew Training Wing at Davis-Monthan AFB, Arizona. Gregory attended the United States Naval Test Pilot School at Patuxent River Naval Air Station, Maryland, from September 1970 to June 1971. Following completion of this training, he was assigned to the 4950th Test Wing, Wright Patterson AFB, Ohio, as an operational test pilot flying fighters and helicopters. In June 1974, Gregory was detailed to the NASA Langley Research Center, Hampton, Virginia. He served as a research test pilot at Langley until selected for the Astronaut Program in January 1978. Gregory has logged more than 6,976 hours flying time in over 50 types of aircraft -- including 550 combat missions in Vietnam. He holds an FAA commercial and instrument certificate for single- and multi-engine airplanes and helicopters. He has authored or co-authored several papers in the areas of aircraft handling qualities and cockpit design.

NASA EXPERIENCE: Gregory was selected as an astronaut in January 1978. His technical assignments included: Astronaut Office representative at the Kennedy Space Center during initial Orbiter checkout and launch support for STS-1 and STS-2; Flight Data File Manager; lead spacecraft communicator (CAPCOM); Chief, Operational Safety, NASA Headquarters, Washington, D.C.; Chief, Astronaut Training; and a member of the Orbiter Configuration Control Board and the Space Shuttle Program Control Board. A veteran of three Shuttle missions he has logged over 455 hours in space. He served as pilot on STS-51B (April 29 to May 6, 1985), and was the spacecraft commander on STS-33 (November 22-27, 1989), and STS-44 (November 24 to December 1, 1991). Gregory served at NASA Headquarters as Associate Administrator for the Office of Safety and Mission Assurance (1992-2001), Associate Administrator for the Office of Space Flight (2001-2002), and NASA Deputy Administrator (2002-2005). Gregory resigned from NASA in October 2005.

SPACE FLIGHT EXPERIENCE: STS-51B/Spacelab-3 launched from Kennedy Space Center, Florida, on April 29, 1985. The crew aboard the Orbiter Challenger included spacecraft commander, Robert Overmyer; mission specialists, Norman Thagard, William Thornton, and Don Lind; and payload specialists, Taylor Wang and Lodewijk Vandenberg. On this second flight of the laboratory developed by the European Space Agency (ESA), the crew conducted a broad range of scientific experiments ranging from space physics to the suitability of animal-holding facilities. The crew also deployed the Northern Utah Satellite (NUSAT). After seven days of around-the-clock scientific operations, Challenger and its laboratory cargo landed on the dry lakebed at Edwards AFB, California, on May 6, 1985. Mission duration was 168 hours, 8 minutes, 47seconds. STS-33 launched at night, from Kennedy Space Center, Florida, on November 22, 1989. On board the Orbiter Discovery, Gregory’s crew included the pilot, John Blaha, and three mission specialists, Manley (Sonny) Carter, Story Musgrave, and Kathryn Thornton. The mission carried Department of Defense payloads and other secondary payloads. After 79 orbits of the Earth, this five-day mission concluded on November 27, 1989, with a hard surface landing on Runway 04 at Edwards AFB, California. Mission duration was 120 hours, 7 minutes, 32 seconds. STS-44 launched at night from the Kennedy Space Center, Florida, on November 24, 1991. During 110 orbits of the Earth, the crew successfully deployed their prime payload, the Defense Support Program (DSP) satellite. They worked on a variety of secondary payloads ranging from the Military Man in Space experiment designed to evaluate the ability of a space borne observer to gather information about ground troops, equipment and facilities, and also participated in extensive studies evaluating medical countermeasures to long duration space flight. The crew aboard the Orbiter Atlantis included the pilot Tom Henricks; three mission specialists, Story Musgrave, Jim Voss, and Mario Runco Jr.; and payload specialist Tom Hennen. The mission concluded on December 1, 1991, with a landing at Edwards Air Force Base in California. Mission duration was 166 hours, 50 minutes, 42 seconds. 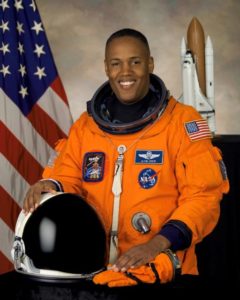 EXPERIENCE: Upon graduation from the United States Air Force Academy, Drew entered the U.S. Air Force as a Second Lieutenant in May 1984. He completed Undergraduate Helicopter Pilot Training - at Fort Rucker, Alabama, earning a helicopter qualification and his pilot wings in March 1985. His initial assignment was as a combat rescue helicopter pilot from 1985 to 1987. In 1987, he transitioned into USAF special operations. There flew 60 combat missions in operations over Panama (1989), the Persian Gulf (1990-1991) and Northern Iraq (1991-1992). In 1992, he returned to flight training – first obtaining a rating in jet aircraft in April 1993, and then, becoming a test pilot, at the United States Naval Test Pilot School in June 1994. He subsequently worked as a project test pilot, commanded two flight test organizations, and served on the U.S. Air Force’s Air Combat Command staff. As a Command Pilot with more than 25 years experience, Colonel Drew retired from the Air Force in September 2010. He has more than 3,500 hours flying experience and has piloted 30 different types of aircraft.

NASA EXPERIENCE: Selected as a mission specialist by NASA in July 2000, Drew reported for training in August 2000. Following the completion of 2 years of training and evaluation, he was initially assigned technical duties in the Astronaut Office Station Operations Branch. From January-November 2009, he served as Director of Operations at the Gagarin Cosmonaut Training Center in Star City, Russia. He has logged more than 612 hours in space on STS-118 in 2007 and STS-133 in 2011.

SPACE FLIGHT EXPERIENCE: STS-118 (August 8 -21, 2007) was the 119th space shuttle flight, the 22nd flight to the station, and the 20th flight for Endeavour. During the mission Endeavour's crew successfully added another truss segment, a new gyroscope and external spare parts platform to the International Space Station. A new system that enables docked shuttles to draw electrical power from the station to extend visits to the outpost was activated successfully. A total of four spacewalks (EVAs) were performed by three crewmembers. Endeavour carried some 5,000 pounds of equipment and supplies to the station and returned to Earth with some 4,000 pounds of hardware and no longer needed equipment. Traveling 5.3 million miles in space, the STS-118 mission was completed in 12 days, 17 hours, 55 minutes and 34 seconds. STS-133 (February 24 - March 9, 2010), was the 39th and final mission for Space Shuttle Discovery. During the 13-day flight, the Discovery crew delivered the Permanent Multipurpose Module (PMM) and the fourth Express Logistics Carrier (ELC) to the ISS. The crew also delivered critical spare components including Robonaut 2, or R2, the first human-like robot in space. The mission’s two space walks assisted in outfitting the truss of the station and completed a variety of other tasks designed to upgrade station systems. The mission was accomplished in 202 Earth orbits, traveling 5.3 million miles in 307 hours and 3 minutes.