Will Davis playing the role of Santa Claus

(Note: This story is in part an article published in the December 30 2005 issue of the Florida Today—Suntree in Review) 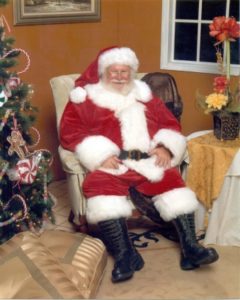 Santa is relaxing poolside in a deck chair after a long and very busy Christmas season He personally has made more than 20 visits throughout the Suntree and South Brevard area.

For those, who don’t know “Santa is real” said Suntree resident Will Davis, who helps out the “real” Santa by playing the part each year during the holidays.

His daughter agrees Santa is real. I go with him and play the elf she said. I enjoy that he plays Santa Claus and wherever we go we always leave much happiness.

Although he has been playing the part of Santa for many years he didn’t really begin being an “official Santa” until the mid-1980s when he was assigned at Myrtle Beach Air Force Base in South Carolina. Members of the Officers’ Wives Club asked him to play Santa for a holiday party and the rest is history. For Davis taking on the role of Santa is a dream come true.

I’ve always been a softie, Davis said. I always had a desire to be Santa, but for a long time I was too skinny to make it believable and I couldn’t grow a beard while I was in the Air Force.

I remember as a child getting my hand caught in Santa’s beard. I was in awe, he’s real you know.

When not working his day job Santa Davis still launches an ambitious holiday program and much of it is free.

Sadly I have to turn people down as the result of getting so busy. I give most of what I make to charity. This year I’m going to donate to Daily Bread to help feed the homeless.

I do special things to be more authentic said Davis. I wear real boots; have a real beard, and a good Santa suit. I carry a lump of coal for effect.

Seriously Santa, Will Davis carries a mock drivers’ license to identify himself as he listens to the gift list wishes of girls and boys. 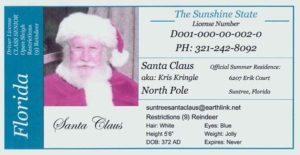 Fellow ROTORHEAD Will “Santa Claus” Davis continued his annual task of playing Santa Claus for many children in the area where he lives. The following are his words on this year’s activities: 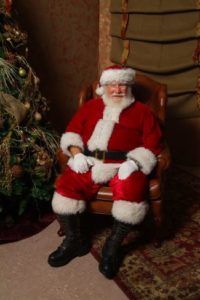 I had an extremely rewarding Christmas Holiday. I just wanted you to know that your Santa has been very busy doing all of the things a good Santa should do, by visiting around 75 families with children as Santa Claus. I have visited five elementary schools, provided the equipment and know-how to provide pictures with Santa to all the schools I visited.

I also visited sick children at a major hospital here in Melbourne. I was able to fulfill a dying 8 year old's request to have a Santa visit. Did I say the right thing to her, I sure hope so, Alicia Martin died on Saturday night, December 23 at 6:15 EST in her mother's arms? I did try to give the little girl words of encouragement, without being too flowery.

On the lighter side I did the introductions to the Nutcracker Suite for the Galmont Ballet, I had a blast; we did a special show for a young cancer patient who previously studied ballet. This event was very touching; I discovered that I had a soft spot for special needs children.

On Christmas Eve I spent the day making home visits, reading stories, showing my big lump of coal and giving families with children a small lump of coal in sandwich bags to use as a motivation device. My last visit around midnight was a non-interactive visit, a reenactment of the night before Christmas. Whereas I make a great amount of noise pretending that I was unlocking their unlocked doors with a Santa Key. I go in and stuff the stockings, from marked bags, then pull the presents from my huge Santa bag; it is 4 feet by 3 feet and put them under the tree, with color coordinated wrappings.

I am looking forward to a few days of rest.