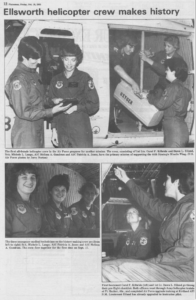 FIRST HELICOPTER AIRLIFT IN A C-54

On January 17, 1945, a priority radio was received stating that a helicopter was urgently needed to rescue a group of American fliers who had been forced down in Burma. The problem was the helicopter was located at Wright Field in Dayton OH. This is an interesting story of airlifting the YR-4 in a C-54 and of a rescue mission that took place after arrival.

(Thanks to Tom Garcia it is important to note that the first helicopter air lift took place early in 1944. Sikorsky YR-4Bs were airlifted to India aboard Curtiss C-46 Commandos for combat evaluation. Lt. Carter Harmon made the first AAF helicopter rescue in one of these aircraft).

FIRST SUCCESSFUL RESCUE OF A HUN PILOT IN SOUTHEAST ASIA

SUPER SABER SOCIETY HAS GRANTED PERMISSION TO POST THIS DOCUMENT. SPECIAL THANKS FROM USAF ROTORHEADS TO:
R. Medley Gatewood, Editor, The Intake