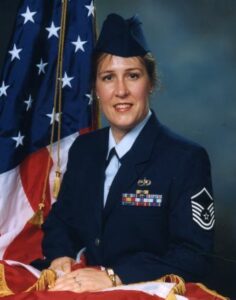 Diane is recognized by USAF ROTORHEADS as being the second woman to retire from the United States Air Force helicopter career field. Diane is believed to be the first woman to retire having served her entire career in hands-on helicopter maintenance positions (flightline/phase docks). This is unusual due to the fact that the majority of career-minded women leave the aircraft maintenance field in pursuit of a non-maintenance career path.

Diane's helicopter career took her to numerous locations while assigned to various H-3 and H-53 organizations. See her biography section below for details of her Air Force career.

During her career, Diane accumulated a wide assortment of pictures. She has graciously given us approval to post a selection of the many pictures in her significant collection. 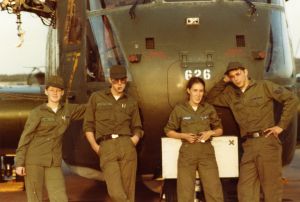 Short bio: Enlisted in the open electronics field. Had no idea what I wanted to do. At basic training is when we had to apply & they showed us several listings in aircraft maintenance. I had no idea what the type aircraft were, but could decipher the word "helicopter". We had to put down several choices & mine came back approved Helicopters! Off to tech school.

My first assignment: Sembach AB, West Germany, Dec 1978 - July 1982. (I should've stayed longer.) Worked in the phase dock on CH-53Cs, used as troop/trash haulers. During our down time, we had to assist in the OV-10 phase dock & I was the Tech Order filer. Other women in the career field there: Joni Bye, Pat Shirk. Started my private pilot license at Ramstein aero club.

Next: Kirtland AFB, NM until Jan 1984. Worked in the phase/ISO docks on HH-53s, used for aircrew training. Sewed on SSgt under 4 years time in service. Finished my private pilot license at base aero club.

Next: Keflavik NAS, Iceland until Feb 1985. Mission was Rescue. Assigned to HH-3E, tail #3285. First time ever assigned as a crew chief, & on a foreign airframe. It had been in phase before I arrived, & given the task to rig the flight controls. The people assigned couldn't get it figured out. I pointed out that they were using the base 10 number system instead of base 60 for the computations necessary for minutes/degrees used in flight control rigging. After being grounded for about 48 days, it passed FCF (functional check flight) on the first try. 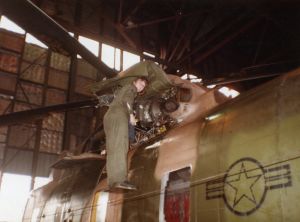 My aircraft achieved the 300th rescue. Served as Operations Officer of the Navy Flying Club, also a member of the Rocky Road 4-Wheeler Club.

Next: Hurlburt Field, FL until Jan 1992. Assigned to MH-53J ISO Dock. Units transitioned into Special Operations Squadrons. During Operation Desert Storm, worked as hangar door guard in FL, due to no aircraft to work on! A year after the war, it finally came out in the newspapers that it was our helis that were first to cross the Iraqi border carrying troops to take out the command & control centers. Was on team that wrote career field WAPS test. Started the preparation of the H-3 to go into the base air museum outdoors. 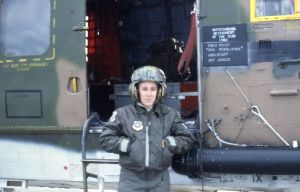 Next: RAF Alconbury, UK until Jan 1994. Assigned as swing shift supervisor/expeditor on MH-53Js. First had to transfer unit from RAF Mildenhall to RAF Alconbury. Enjoyed working the flightline during base Air Tattoos.

Still curious to know if there were other women who stuck it out the full 20 years on helicopters. Perhaps I was part of a rare breed. . . .